Email Josh at josh@joshuaahharris.com or use the button below.
Email Josh

Joshua A.H. Harris is a writer, father, and recovering environmental attorney. He grew up in Laramie, Wyoming, served in the Peace Corps in Mali, West Africa, and currently lives in the Bay Area. Joshua holds degrees from Brown University, UC Davis, and San Francisco State University. His writings have appeared in the East Bay Times, Gravitas (Pub House Books), Berkeley Times, and Ars Poetica. In 2014, he wrote Out of the Fog, a serialized novel released one chapter per week over the course of a calendar year. In 2017, Joshua became an associate editor for La Vil: Stories from the Streets of Port-au-Prince, Voice of Witness (San Francisco). More recently, he wrote and published Common Sense 2019: A Bipartisan Call to Take Back Our Government, a political pamphlet that addresses the fundamental problem of money in politics. Joshua is also an associate producer of the following movies: Night Comes On (2018) starring Dominique Fishback and Tatum Marilyn Hall; House of Tomorrow (2017), starring Asa Butterfield; Lucky (2017), starring Harry Dean Stanton; and Columbus (2017), starring John Cho, Haley Lu Richardson, Parker Posey. After writing multiple “practice” novels over the course of twenty odd years, Joshua broke into the gilded realm of authorship in 2019 with his first published novel, Unorthodoxy.

To download a high-resolution jpg suitable for both print and online media, click the thumbnail image to get a larger version, then right mouse click and choose the “Save As…” option (PC) or press the Control key and choose “Save Image As…” (Mac). 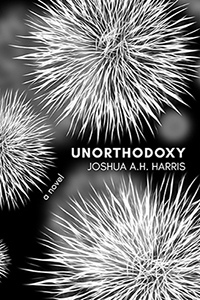